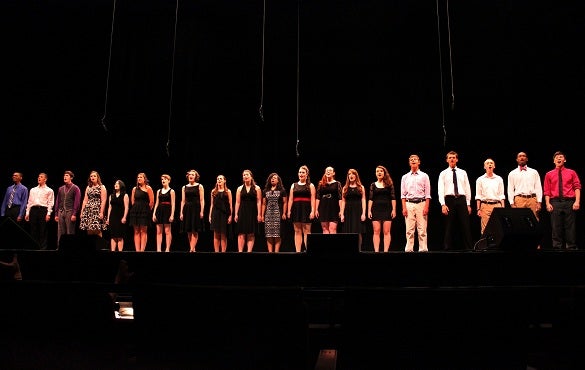 Along with Theatre in the Park, Playmakers Repertory Company and ABC 11, DPAC hosted this year’s Triangle Rising Star Awards onstage on Sunday evening, June 2. The Triangle Rising Star Awards (TRS) is a program that brings together area high school musical theater students to perform together and compete against one another for educational scholarships. Bailey’s Fine Jewelry presented the awards for Best Actress and Best Actor, while DPAC staff members also presented the awards for local high school productions in Best Ensemble and Best Musical.

“It is a privilege to be representing the Triangle Rising Star program in New York City,” raves Sam Hamashima, winner for this year’s Best Actor. “But the best part of this experience has been the people I have met and friends I have made. It is a blessing an honor to be part of such a fantastic team.”

Directed by David Henderson, over 400 patrons witnessed the 20 finalists open with “We Go Together” (Grease). Diane Petteway, Music Director and Arranger, led a full band to accompany the student performances. In a Broadway medley, each student had their own chance to shine in solo performances from their individual characters – including the full ensemble joining Durham School of the Arts’ Angeline Fuqua in “Somewhere Over the Rainbow” (The Wizard of Oz). After awards were presented, the entire cast of finalists closed out the evening with a tear-jerking rendition of “Seasons of Love” (Rent).

The Triangle Rising Star Awards is a member of The National High School Musical Theater Awards (NHSMTA) on July 1, a national program that unites high school musical theater awards programs from across the country under one roof. The two student winners are provided with $1,000 academic scholarships along with an invitation to represent TRS in an all-expense paid trip to the National High School Musical Theater Awards in New York City for one week, June 25 – July 2, 2013. The students will train with real Broadway actors, directors and producers. Their week of coaching, auditions and rehearsals will conclude with each student’s life-long dream at the Minskoff Theatre on Broadway. At which, a panel of judges will choose two students for the coveted Jimmy™ Awards for Best Performance by an Actor and Best Performance by an Actress.

The Best Actor and Best Actress were awarded on Sunday night after a four months’ long audition process. Representatives from DPAC, Theatre in the Park, Playmakers Repertory Company and ABC 11 attended high school musicals from area counties, including: Chatham, Durham, Harnett, Johnston, Orange and Wake Counties. Over 35 applicants auditioned for the program, which was narrowed down to 20 finalists, including 12 women and eight men.

The Triangle Rising Star Awards are in conjunction with The National High School Musical Theater Awards which is a national celebration of outstanding student achievement in high school musical theater. Established by Nederlander Alliances and Pittsburgh CLO, the program recognizes individual artistry in vocal, dance, and acting performance, as well as honors teachers and their schools’ commitment to excellence in performing arts education.