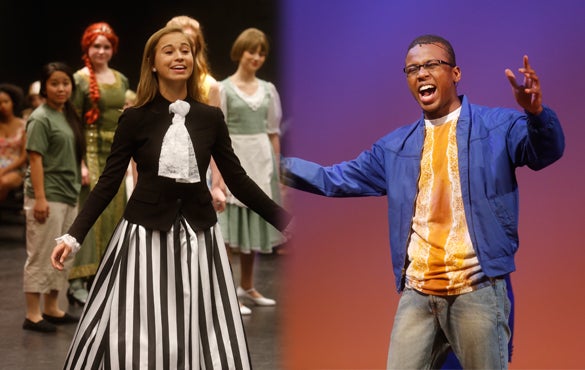 Durham, N.C. - Along with Theatre in the Park, Playmakers Repertory Company and ABC 11, DPAC (Durham Performing Arts Center) is thrilled to announce the success of our 2014 Triangle Rising Star best actress and best actor winners, English Bernhardt and Matthew Washington, at the sixth annual National High School Musical Theatre Awards held in New York City on Monday, June 30th, 2014. Bernhardt was awarded Best Performance in an Ensemble and Washington was awarded the Spirit of the Jimmy Awards, two of only five awards given out among the fifty-six national finalists.
The National High School Musical Theatre Awards, known as the Jimmy Awards after Broadway producer James N. Nederlander, were held at Broadway’s Minskoff Theatre on June 30. The finalists, including Bernhardt and Washington, all won top honors at their respective regional competitions and competed for the Best Actor and Actresses titles. The Jimmy Awards were the finale to conclude a week-long intensive, where the students met with industry professionals, received private coaching, attended a Broadway show and rehearsed for each part of the sold-out awards ceremony held in Broadway’s home of The Lion King.
When asked about the Jimmy Awards, Washington said, “I am still pinching myself... this experience is one that I know I will always hold close to my heart. Meeting and working with such talented people really opened my eyes to all the possibilities that the future holds.”
As the winners of Triangle Rising Star Awards held at DPAC on June 2, 2014, Bernhardt and Washington finished in the top spots of a pool of 50 Triangle applicants, which was narrowed down to 20 finalists, including 10 women and 10 men.  One thousand dollar scholarships were awarded to each student as well as this all-expenses paid trip to New York City. “Travelling to New York and spending a week working with top industry professionals was a dream come true,” Bernhardt said. “It was so inspiring to be surrounded by such amazing talent who share your passion for musical theatre as you work together towards the same goal…putting on a sold-out Broadway show!”

Students and schools interested in applying for the 2015 Triangle Rising Star awards will be able to begin submitting their applications in August for high school musicals starting in the fall.
For more information about how to get involved in the Triangle Rising Star Program, visit: http://www.dpacnc.com/trs
For more information about the National High School Musical Theatre Awards/ Jimmy™ Awards, visit: http://nhsmta.com