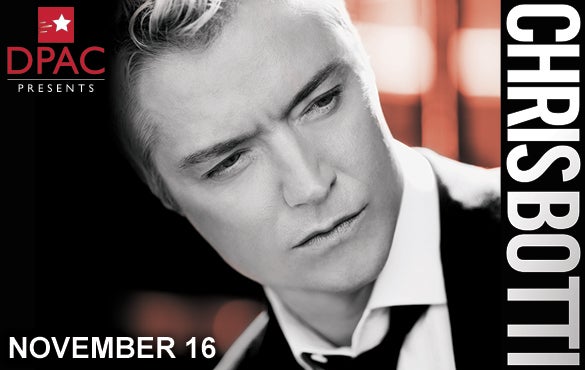 April 28, 2014 (Durham, NC) – One of the world’s best-selling jazz trumpeters Chris Botti returns to DPAC, Durham Performing Arts Center, on November 16, 2014. This show is presented in partnership with the Carolina Theatre.

"Along with our friends at the Carolina Theatre, we are pleased to add superstar trumpeter Chris Botti to our concert lineup this year. Backed by an amazing band, Botti returns to DPAC by popular demand after his 2011 appearance, providing fans the opportunity to experience his highly-acclaimed musicianship live. Join us for an unbelievable evening of award-winning jazz and more,” said Emily Dahl McLoughlin, Marketing Director for Concerts at DPAC.

His early career was spent crafting his skills in settings reaching from the Buddy Rich Big Band and Frank Sinatra to Natalie Cole and Joni Mitchell.  Throughout the ‘90s and into the new century, Botti played extensively with Paul Simon, and had an especially creative association with Sting.

Now a major artist in his own right, performing worldwide, selling more than three million albums, he has found a form of creative expression that begins in jazz and expands beyond the limits of any single genre.  With Impressions and the albums that preceded it, Chris Botti has thoroughly established himself as one of the important, innovative figures of the contemporary music world.

Impressions is the latest in a stellar parade of albums -- starting with 2004’s When I Fall In Love and continuing with To Love Again, Italia and the CD/DVD Chris Botti In Boston -- that have firmly established him as the world’s best-selling jazz instrumentalist. Add to that a Grammy® for Best Pop Instrumental Album and four #1 albums on Billboard’s Jazz Albums listings, and you’ll see why this is a show that should not be missed.