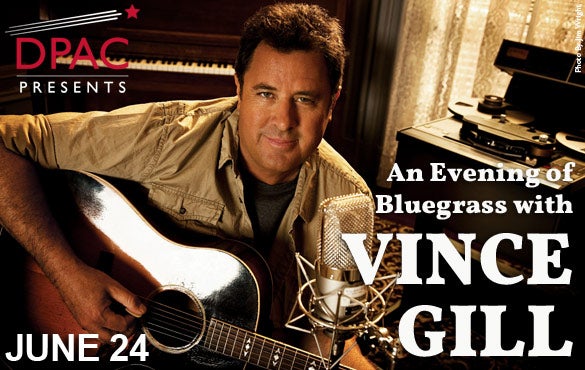 A 20-time Grammy-winner and member of the Country Music Hall of Fame, Gill will be backed by a band made up of some of the most acclaimed pickers in contemporary music, specifically fiddler Stuart Duncan, guitarist Jeff White, banjoist Jim Mills and bassist Dennis Crouch. Gill will round out the band on guitar, mandolin and vocals.

"After the passing of Earl Scruggs [on March 28],” Gill says, “it means the world to me to do these dates with this world-class band playing the music that Earl defined. I absolutely adore this music."

Duncan, a four-time Grammy winner and member of the Nashville Bluegrass Band,has recorded with Alison Krauss, Yo Yo Ma, Elvis Costello, Dolly Parton and Willie Nelson, among many others; Jeff White, a regular member of Gill’s band, has also made records with Del McCoury, Lyle Lovett, The Chieftains and Keith Whitley. Mills, who earned five Grammys as a member of Ricky Skaggs’ Kentucky Thunder, appears too on albums by Doyle Lawson, Bruce Hornsby and Garrison Keillor. Crouch, like Gill, is a member of the Nashville cult band, The Time Jumpers, and has recorded with such luminaries as Ralph Stanley, John Fogerty, Steve Earle, Johnny Cash and Elton John.

Tickets can be purchased online at DPACnc.com or Ticketmaster.com. Or via the DPAC Ticket Center: 919.680.2787, 123 Vivian Street, Durham, NC or Ticketmaster Charge by phone at 800.745.300 as well as Ticketmaster outlets including Crabtree Valley Mall.

For more information go to www.vincegill.com