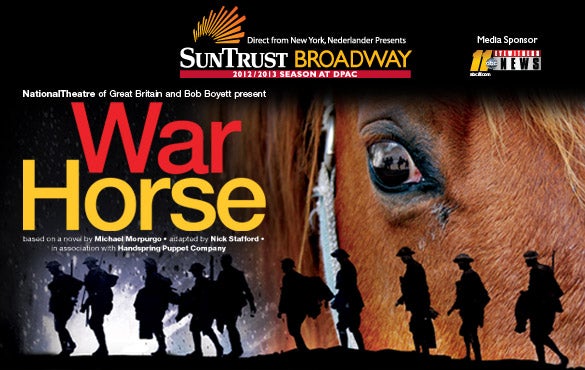 WAR HORSE has been seen by 2 million people worldwide and is currently playing at New York’s Lincoln Center Theater, in London’s West End, and at Toronto’s Princess of Wales Theatre. Future productions of WAR HORSE are planned for Australia, Berlin and South Africa, as well as a UK Tour.

WAR HORSE will make its Triangle premiere at DPAC, October 2 – 7. The performance schedule is:

Hailed by The New York Times as “theatrical magic,” WAR HORSE is the powerful story of young Albert’s beloved horse, Joey, who has been enlisted to fight for the English in World War I. In a tale the New York Daily News calls “spellbinding, by turns epic and intimate,” Joey is caught in enemy crossfire and ends up serving both sides of the war before landing in no man’s land. Albert, not old enough to enlist, embarks on a treacherous mission to find his horse and bring him home. What follows is a remarkable tale of courage, loyalty and friendship, filled with stirring music and songs and told with the some of the most innovative stagecraft of our time.

The tour of WAR HORSE, based on the beloved novel by Michael Morpurgo and adapted by Nick Stafford, will be directed by Bijan Sheibani based on the original Tony® Award-winning direction by Marianne Elliott and Tom Morris, and presented in association with Handspring Puppet Company. At the heart of the show are life-sized puppets which bring breathing, galloping, charging horses to thrilling life on stage.

In addition to Best Play, WAR HORSE received Tony® Awards for Best Direction of a Play (Marianne Elliott and Tom Morris), Best Scenic Design of a Play (Rae Smith), Best Lighting Design of a Play (Paule Constable), and Best Sound Design of a Play (Christopher Shutt). A Special Tony Award was given to Handspring Puppet Company for their integral work on the production.

WAR HORSE received its World Premiere in a limited engagement at the National’s Olivier Theatre in 2007. The play returned to the National Theatre for a second run playing from in 2008-2009 before transferring to the West End’s New London Theatre in Spring 2009 where it continues to play an open-ended run. WAR HORSE has been seen by 2 million people worldwide.

Lincoln Center Theater and the National Theatre of Great Britain in association with Bob Boyett and War Horse LP, are the producers of the American premiere of WAR HORSE, which opened in Spring 2011 at the Vivian Beaumont Theater where it is currently playing an open-ended run.