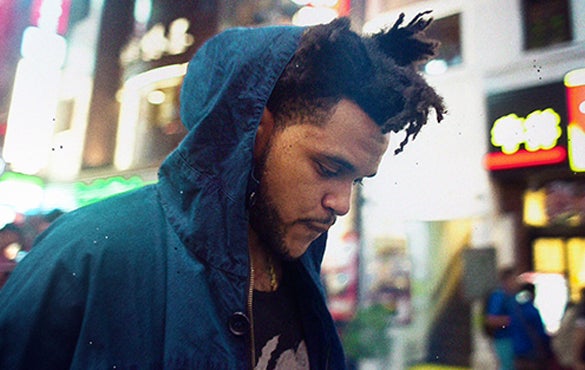 On stage, Alt-R&B's futuristic provocateur seamlessly merges his chaotically sexy music with haunting and hypnotic visuals, making for an immersive live experience that spares none of the senses. His impressive falsetto carries with the same tortured bliss on stage, creating a must-see evening for fans and newcomers alike.
Support on the tour will come from Australian electronic dance music seductress Anna Lunoe and LA-based singer/ songwriter Banks, creating a diverse and dynamic evening hand-picked by the headliner.
“THE FALL” tour will come on the heels of the soon to be announced released sophomore album, Kiss Land [XO/REPUBLIC RECORDS], which is due out at the end of the summer. Easily one of the most anxiously awaited albums of 2013, THE WEEKND has already given fans a preview of record with the release of a self-titled teaser track. The song, “Kiss Land”, is another sonic seduction under a blanket of synth gyrations and piercing falsetto, and is available now on iTunes.

With 30 songs on his platinum-certified landmark debut Trilogy, he captivated both listeners and critics. Upon release, the collection landed at #4 on the Billboard Top 200. Digitally, it reached #2 on the iTunes Overall Albums Chart, while holding strong on the R&B chart.

Major gatekeepers continue to extol THE WEEKND. The New York Times called him "other worldly", The Source named him "Songbird of his generation, while The Guardian dubbed him a "blatantly provocative and daring new artist". Spin put it best in two simple words, “Totally amazing".
THE WEEKND would now like to formally invite you into Kiss Land.

About DPAC
Since its opening in 2008, DPAC, the Durham Performing Arts Center, has become the center for live entertainment in the Triangle. Recognized for its contemporary design, DPAC features 2,700 seats, intimate sightlines and state-of-the art sound and video. Listed four times in the top 10 in Pollstar magazine’s annual worldwide theater attendance rankings, DPAC is currently the #5 ranked theater in the U.S.

What is up next at DPAC this summer? SHERYL CROW in her most intimate concert ever in the Triangle (August 3), followed by Politically Incorrect comedian and host of HBO’s Real Time BILL MAHER (August 10).