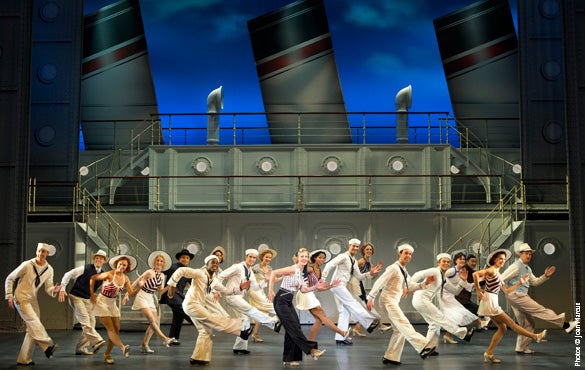 The national tour of Roundabout Theatre Company’s ANYTHING GOES, the new Broadway revival of Cole Porter’s timeless classic musical theatre masterpiece, will make its Triangle premiere March 19-24 at DPAC as part of the SunTrust Broadway, 2012 / 2013 Season. In Thursday’s performance, WTVD ABC 11’s Barbara Gibbs will take the stage in a special walk-on role as with the cast’s ensemble.

As co-anchor of the ABC 11 Eyewitness News in the morning and noon newscasts, Gibbs has covered all facets of the news, but her true passion lies in telling stories about the “positive power of the human spirit.” From heartfelt stories to taking the Broadway stage, she delves into culture and human interest with absolute fervor.

Winner of the 2011 Tony Award® for Best Revival of a Musical, Roundabout Theatre Company’s ANYTHING GOES sails direct from Broadway under the direction of Kathleen Marshall, who won the 2011 Tony Award® for Best Choreography, at the Stephen Sondheim Theatre following an opening in the spring of 2011. The New York Times calls it “a zesty new revival with knockout numbers and white-hot dancing” while the AP exclaims that it’s, “so delightful, so delicious, so de-lovely!”

Along with Barbara Gibbs, the national tour features a stellar cast of Broadway veterans and newcomers:

ANYTHING GOES, the 1934 musical comedy about the lovers, liars and clowns on a transatlantic cruise is “a daffy, shipshape romp!” - Variety. When the S.S. American heads out to sea, etiquette and convention head out the portholes as two unlikely pairs set off on the course to true love… proving that sometimes destiny needs a little help from a crew of singing sailors, an exotic disguise and some good old-fashioned blackmail.

The New Broadway Cast Recording of Roundabout Theatre Company’s ANYTHING GOES, nominated for a 2011 Grammy Award for Best Musical Show Album, is available on Ghostlight Records.

ROUNDABOUT THEATRE COMPANY (Todd Haimes, Artistic Director) was most recently represented across the country with the critically acclaimed, multi-award-winning national tour of Twelve Angry Men that toured the country for 2 years, spending 63 weeks across the United States and Canada. Roundabout’s longest-running musical, the revival of Cabaret, received a multi-year tour across the country beginning in 1999. In 2011, Roundabout Theatre Company’s acclaimed work reached a worldwide cinema audience with the HD capture and broadcast of their Tony nominated production of The Importance of Being Earnest, starring Brian Bedford.

Now in its 46th season, Roundabout has become one of New York City’s most accomplished cultural institutions and one of the country’s largest not-for-profit theatre companies. With four theatres both on Broadway and off, Roundabout reaches over 600,000 theater goers annually, including over 35,000 subscribers, through award-winning productions of classical and contemporary plays and musicals. In addition to providing an artistic home for many of the finest actors, playwrights, composers and directors of our time, Roundabout is home to model education and outreach programs designed to diversify and develop the theatre’s audiences. With four distinctive homes, the American Airlines Theatre, Studio 54 and the Harold and Miriam Steinberg Center for Theatre, site of the Laura Pels Theatre and Black Box Theatre, Roundabout has the unique ability to do high-quality, professional stagings of work in a venue perfectly suited to enhance each production. Roundabout also programs the Stephen Sondheim Theatre, where its 2011 Tony Award winning production of Anything Goes played. Since moving to Broadway 20 years ago, Roundabout productions have received 181 Tony® nominations, 174 Drama Desk nominations and 195 Outer Critics Circle nominations. Production highlights include Anna Christie, She Loves Me, A View from the Bridge, 1776, Nine, Assassins, Intimate Apparel, The Understudy, The Pajama Game, Sunday in the Park with George, Waiting for Godot, The Importance of Being Earnest and Cabaret, one of the longest-running musical revivals in Broadway history.