On November 28th, 2021 we saw Jason Mraz, percussionist Toca Rivera and folk singer
Gregory Page at DPAC. The special part of this concert was that it was a return to the basics for
Mraz and Co. On the stage, The only people there were the trio plus singer Chaska Potter, known
for her work in the band Raining Jane. With this compact ensemble, only a small number of
instruments were used. Only acoustic guitars, a lute and a bongo drum surrounded by various
other small percussion instruments were used throughout the entire concert. This led to a very
acoustic and intimate sound, which is a callback to Mraz and Rivera’s club days captured on his
album, “Jason Mraz Live & Acoustic 2001”.

Page was the opener, touring with Mraz to promote his new album “One Hell of a
Memory”, released on Mraz’s record label, Interrabang. He performed a variety of songs off of
this new album, which audience members seemed to enjoy. The highlight of the set for me was
when Mraz and Rivera along with Potter joined him to perform a cover of “Space Oddity” by
David Bowie. This song helped display the group’s knack for harmony and humor, having
someone dressed as an astronaut come out and start walking around the stage during the chorus.
After this song there was a brief intermission before Mraz and Rivera came back on stage.

When they returned to the stage, magic occurred. Rivera and Mraz played a variety of
tunes ranging from deep cuts on their first album such as “1000 Things” to monster hits like “I’m
Yours” and “Lucky” featuring a duet with Mraz and Potter. This acoustic environment helped
show these songs in a new light, showcasing the incredible harmonies between Rivera and Mraz.
This also allowed for the musicians to interact more with the audience and left room for
occasional banter between the two which helped create a more intimate experience.
Overall this was a great show and I would definitely recommend going to see them on this tour if
you're a fan or want a fun laid back night with some great acoustic music. 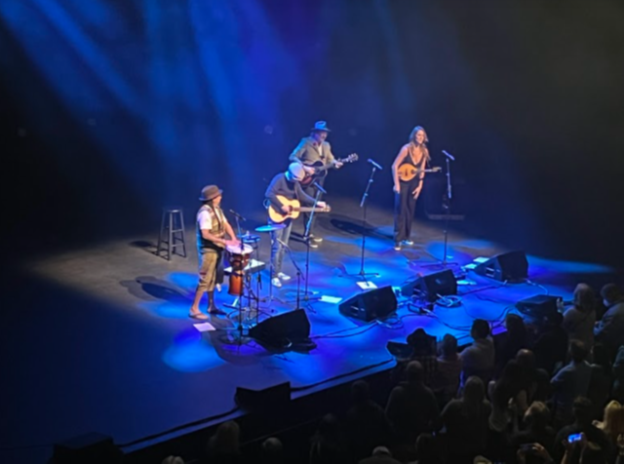